NEW DELHI: Union home minister Amit Shah, the other day, accused opposition parties of inciting communal riots over CAA by spreading misinformation that Muslims will lose their citizenship because of the new law. 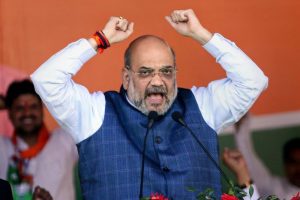 “Opposition parties are spreading misinformation that Muslims will lose their Indian citizenship because of CAA. They are instigating people and fomenting riots,” he said at a pro-CAA BJP rally in Bhubaneshwar.
“I have said this before and repeating it now that nobody, no Indian Muslim will lose their citizenship because of CAA. This law is for granting citizenship to religious minorities who have been persecuted in Pakistan, Afghanistan and Bangladesh. It’s not intended to take away anyone’s citizenship,” Shah said. Terming CAA a historic step, Shah alleged Congress, Communists, SP, BSP and ‘Mamata didi’ were spreading lies about it. He said the Modi government had only fulfilled the dreams of leaders like Mahatma Gandhi, Sardar Patel, Maulana Azad and others who favoured Indian citizenship for persecuted minorities from the three countries. “With the abrogation of Article 370, Kashmir is now the crown of India,” he said. On Ram Mandir, Shah said: “After BJP returned to power for a second term, the path was paved for building a grand Ram temple in Ayodhya,” he said.