POONCH: The much talked about work on four laning of Jammu Poonch highway is going on from Jammu side and work from Akhnoor stretch also started. 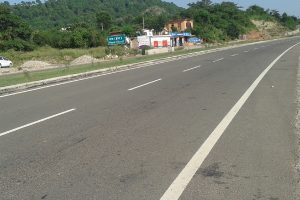 The 5100 crore project was sanctioned by Union Government few years ago and many BJP leaders were seen circulating their posters on social media that sanctioning of the prestigious project was their achievement. But, the picture is not clear yet  about the same work on Akhnoor – Poonch stretch of the Jammu Poonch highway which was declared as National Highway long ago. Sources within the PWD Department said that few  government officials who conducted the survey of the road presented a report to government in which they suggested not to make Akhnoor-Poonch stretch a four lane because of low traffic. They only recommended extension of the road by few meters. If these reports are true, then it’s a big joke with the people of Poonch and Rajouri who have been waiting to see four laning of Jammu Poonch highway. As Poonch and Rajouri are border districts, so government should give these districts a top priority as far as strengthening road infrastructure is concerned, said locals. BJP leadership of Poonch and Rajouri, who earlier celebrated announcement of four laning of Jammu Poonch highway,  have been exposed again for playing fraud with the people on this issue.