Latest News
Mishandling of power! Pleasing top bosses by gruelling individuals without investigation has become a new mantra of the Poonch Police; DGP’s intervention  needed93 Infantry Brigade authorities fail to strengthen the spirit of the sports with unprofessional approach; One mismanaged hockey event mar successful Link up day celebrationsWith Panchayat and Local Bodies elections due next year, assembly elections in J&K are likely to be put offCredibility of the Poonch administration has reached a frightening low due to reports of intensifying dishonestyPUBLIC NOTICE “POONCH TODAY” bold journalism is totally based on an impartial and investigative nature
“POONCH TODAY” story proves 100% true as Dr Farooq Abdullah sidelines Mehbooba on tackling New Delhi; GUPKAR stands no where – Poonch Today 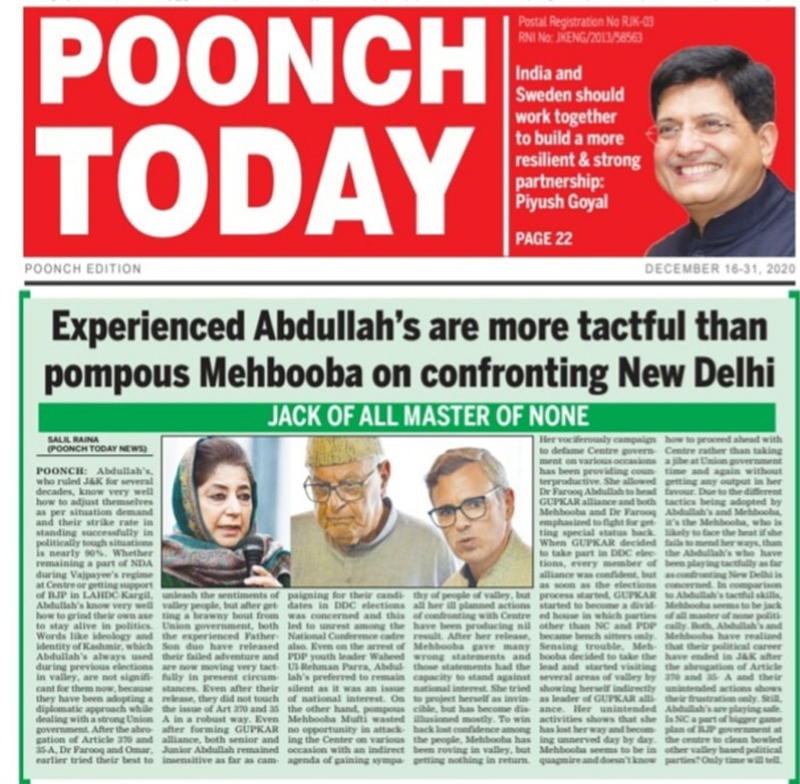 POONCH: On 16th of December 2020, “POONCH TODAY” carried out a story with the title “Experienced Abdullah’s are more tactful than pompous Mehbooba on confronting New Delhi” in which it was clearly explained in detail that Mehbooba Mufti was behaving like an arrogant leader, but at the same time, Abdullah’s are more tactful and they know how to grind their own axe and facts projected by this newspaper proved 100% true, when  Lok Sabha MP from Srinagar, Dr Farooq Abdullah, by completely sidelining PDP chief Mehbooba Mufti, met Parliamentary Standing Committee on Tourism, Transport and Culture at Srinagar, the other day, headed by T.G Venkatesh, Rajya Sabha MP. 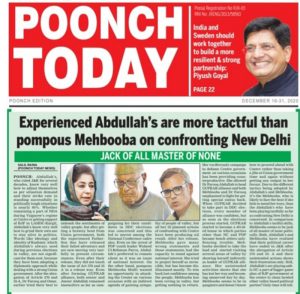 The famous “GUPKAR” alliance, which was  formed with a sole agenda of fighting for restoration of Art 370 stands no where as the other day, People Conference Chairman, Sajad Lone,  said good bye and now, Dr Farooq Abdullah went ahead despite requested repeatedly by PDP chief not to participate in the meeting of Union Government. It is significant to mention here that after the abrogation of Article 370 and 35-A, Dr Farooq and Omar, tried their best to  unleash the sentiments of valley people, but after getting a brawny bout from Union government, both the experienced Father-Son duo have released their failed adventure and are now moving very tactfully in present circumstances. Participation of Dr Farooq Abdullah in the meeting of parliamentary standing committee is a clear signal that Farooq Abdullah is not keen to follow the agenda of GUPKAR. Right from the day, when GUPKAR decided to participate in DDC elections, difference of opinions were started to come out within GUPKAR constituents on seat sharing. Even on the arrest of PDP youth leader Parra, there was not a single word from Abdullah’s. Sometimes, Mehbooba also tried to score points over Abdullah’s by visiting valley based areas by projecting herself as a leader of GUPKAR. But, as said earlier that Abdullah’s are master politicians as compared to Mehbooba, so that proved true again when senior Abdullah, by participating in PSC, has indirectly hinted that he is not ready to indulge in a tussle with Centre, eyeing future political prospects for his party. On the other hand, Mehbooba has become completely isolated having no support from within and outside J&K. The way, things are going on, it would be very difficult for Kashmir based political parties to secure their political future. However, Abdullah’s are expert in gaining out of nothing, so it would be interesting to see how Centre takes Dr Farooq’s participation in Parliamentary standing Committee on Transport, Tourism and Culture meeting, the other day.