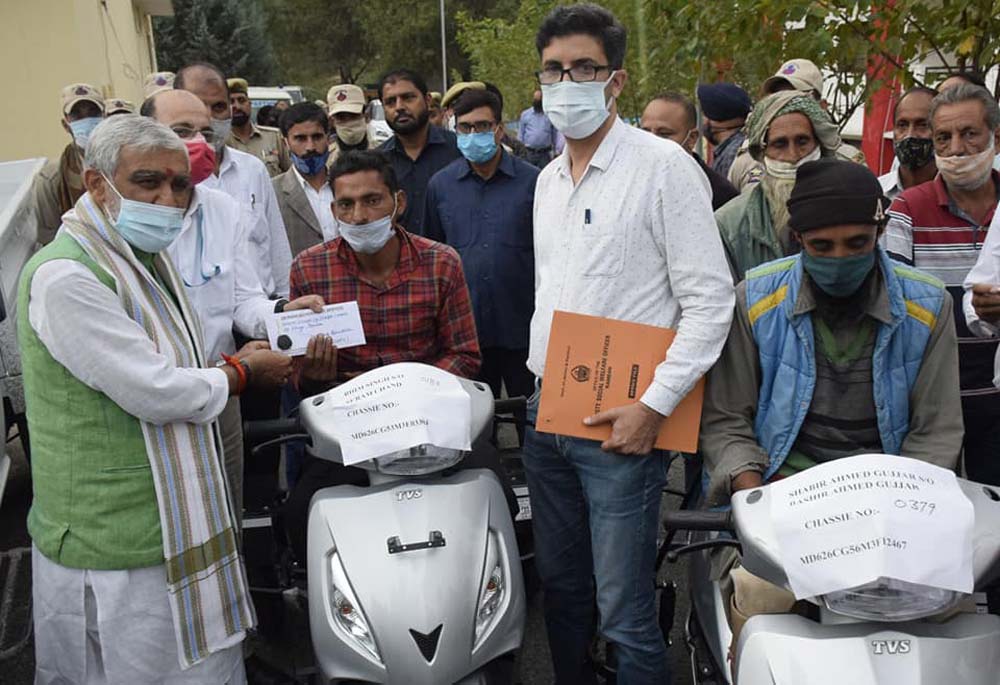 RAMBAN, OCTOBER 22: Maintaining that India has achieved another milestone in administering COVID-19 vaccine to over 100 crore souls of the country in a record time, Union Minister of State for Environment, Forest and Climate Change, Consumer Affairs, Food & Public Distribution, Ashwini Kumar Choubey said this is achieved with the cooperation of people and tireless efforts of administration and health workers. The Minister, who is on a 2-day visit to district Ramban as a part of the Union Government’s Public Outreach Programme, said this while interacting with PRIs and general public at Ramban today. 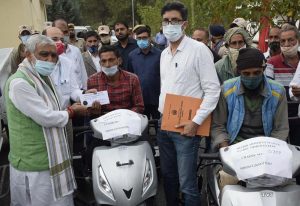 He said that the Union Government under the leadership of Prime Minister Narendra Modi is keen to make holistic development in the UT of Jammu & Kashmir, adding that the aim of the Public Outreach Programme is to visit the people at their door-step to fulfil their developmental needs.
The Minister said that the Union Government has conceived a project to establish 400 Nagarvans in the Country to boost plantation drive and to increase green cover in the urban areas also. He said that one such Nagarvan would also be developed in Ramban. The school nurseries would also be established in educational institutions to promote an environment friendly attitude among children, he added. Ashwini Choubey said that it is his privilege to dedicate various developmental projects to people of Ramban district as a gift on the birthday of Union Home Minister Amit Shah.
The Minister said that the people dwelling in and near the forest areas are the real custodian of these forests, adding that the Union Government is contemplating to frame liberalized policy with regard to Forest Right Act so that the development and protection of forests is ensured.
Complementing the District Administration and Health Department for doing commendable job in achieving cent per cent target in COVID-19 1st dose, Ashwini Choubey also appreciated for leading in second dose of vaccine and SEHAT registration in whole UT of Jammu & Kashmir.
Urging the PRIs to work for the development and welfare of the people of their respective areas, the Minister asked them to work in unison with administration in execution of developmental projects, adding that we are equally responsible and accountable to people. He also asked them to sensitize the general masses so that they can avail the benefits of welfare schemes.
The Union MoS directed the concerned for ensuring implementation and closely monitoring of developmental and welfare schemes so that the benefits of these schemes could percolate at the grass-root levels.
Terming Jammu & Kashmir as the crown of India, the Minister said that the Union Government is committed to develop and strengthen the UT of J&K in all aspects, and added that the Government has framed and launched various beneficiary and youth oriented schemes.
Replying to media persons, the Minister said that the forces inimical to break the secular fabric and hell bent to disturb the peaceful atmosphere and communal harmony in the UT of J&K will not be spared, adding that the people involved in militancy related activities will also be dealt severely.
Directing the concerned officers, the Minister issued on-the-spot instructions to attend to the peoples’ grievances on priority and take necessary steps for their early redressal. Various deputations and individuals met with the Minister. These include members of DDCs, BDCs, Municipal Councillors, Sarpanchs, Panchs, representatives of Youth Club, and prominent citizens. They projected demands of developmental needs from their respective areas.
Later, the Minister e-inaugurated various projects of public importance completed with an expenditure of Rs. 5.91 crore. The projects which the Minister e-inaugurated include Forest Check post at Nashri, Batote, 2nd Unit of 750 LPM Oxygen generation Plant, and 500 MVA Digital X-ray plant at District Hospital, Ramban. The Union MoS also laid e-foundation of link road from NH-IA Barthal to Tamtali, and link road from Bali to Zangli Fashu, at Batote Phase-1 under NABARD which will be constructed at an estimated cost of Rs. 4.30 crore.
Meanwhile, the Minister distributed LPG connections among beneficiaries under the Ujjwala Scheme. He handed over keys of vehicles to beneficiaries under the Mumkin Scheme. He also distributed cheques amongst construction workers under a scholarship scheme besides handing over scooties & wheelchairs among specially-abled beneficiaries provided by J&K Rehabilitation Council.
Ashwini Choubey planted a sapling in the premises of newly established Forest Check Post at Batote. Giving brief account of forest cover in the district, the District Development Commissioner Mussarat Islam highlighted the developmental activities being carried-out under various sectors in the district.
Chairperson, District Development Council, Ramban Dr. Shamshad Shan, besides district officers, and locals were also present on the occasion.