POONCH: As the Union Government is keen to conduct assembly elections in J&K UT because draft report of delimitation process is likely to be released within two to three weeks, accordingly people of the Pahari community are eagerly waiting for getting full ST status, which was denied to them for almost three decades by Kashmir based leaders as they presented a wrong narrative against Pahari speaking people by using Gujjar community for their vote bank politics. 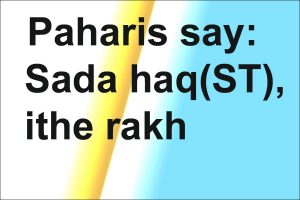 If Paharis get the ST status, then BJP will be in a position to secure more seats from Pahari speaking belts of J&K  and if BJP failed to grant the ST status to Paharis, then it would be political suicide for BJP in the coming assembly elections, feel political pundits. It is pertinent to mention here that Paharis fought for their genuine right for almost three decades, but tall J&K leaders belonging to the other caste in conveyance with a few top bureaucrats played their wrong role in omitting Paharis from the list of ST status by the then union government. Paharis are the second largest population in J&K after Kashmiris and other casts are just nearly 15% of Paharis as per the data. Both Gujjars and Paharis lived together for centuries, but Kashmir-based leaders created a wedge deliberately between them for their political survival. When the J&K government sent its recommendation to the union government for granting the ST status to Paharis, who were placed at S.No 1, few top bureaucrats, on the other hand, instigated the other caste leaders to approach the union government for ensuring that Paharis don’t get the ST status. The then Union Minister Rajesh Pilot along with the then prominent other caste leaders of J&K played a high-level conspiracy against the Paharis and ultimately, Paharis failed to get their most genuine rioght of getting the ST status. Paharis have been protecting the borders for over seven decades, but under a well-planned conspiracy, Kashmiri leaders brought the narrative that only Gujjars secured the border. Kashmiri leaders tried their best to divide Gujjars and Paharis for their political survival. Paharis played their role purely in national character and this fact was established when the then Governor of J&K, Gen K.V Krishna Rao(Retd) recommended the inclusion of Paharis in ST reservation and stood strongly against the letter written to union government by the leaders of the other caste against the inclusion of Paharis. Gen Rao stated that “The state cannot afford to do without their(Paharis) continued support in the present security scenario. Moreover, in view of the fact that the areas inhabited by Paharis are close to the line of control and they have always  remained loyal and steadfast.” In 2019, after a long struggle, Paharis were managed to get 4% reservation with an unfortunate Rs 8 lakh income slab by the then state government and this shows that this union and state governments have accepted that the demand of Paharis of getting the ST status without any income slab  is very much genuine. Kashmir-centric bureaucrats played every possible move to hoodwink Paharis for decades to please Gujjars voters, but in an unpleasant manner, few Gujjars leaders also created a big wedge between Paharis and Gujjaris who lived together for several decades. This ST status was for Paharis initially, followed by Gujjars and few others, but in an act of complete backstabbing, Paharis were thrown out of getting this benefit. Now, BJP led government, which has granted 4% reservation to Paharis with Rs 8 lakh income slab, should grant the full ST status to Pahari-speaking people without any income slab as has been enjoying by Gujjar community, because Paharis are real nationalists in character as they don’t believe in creating a false narrative that they are nationalist people. Nationalism is in their genes and they need no pseudo certificate for that. The demand of nearly 24 lacs Pahari speaking people of J&K is very much genuine and this BJP lead union government should grant them ST status without wasting any more time. Kashmir-oriented leaders and bureaucrats wrongly counted Paharis as Gujjars but did not give the same benefits to Paharis. Those bureaucrats who wrongly projected data of Gujjars and Paharis should be brought to justice under the law as their wrong intentions proved havoc in creating a divide between both the communities. Paharis are real nationalists. They deserve full ST status without any income slab and are always ready to support the BJP in coming assembly elections, provided, they get the much-deserved ST status.  A prominent Pahari leader of Rajouri, while talking to “POONCH TODAY”, wishing anonymity, said, “Modi Ji, Sada Haq, Ithe rakh.”

Security agencies need to strengthen their intelligence grid in Poonch and Rajouri districts after the recent terrorist attacks; Not weak but strong heads needed in both the districts
Rajouri: DLC clears 48 FRA claims benefitting 562 eligible families