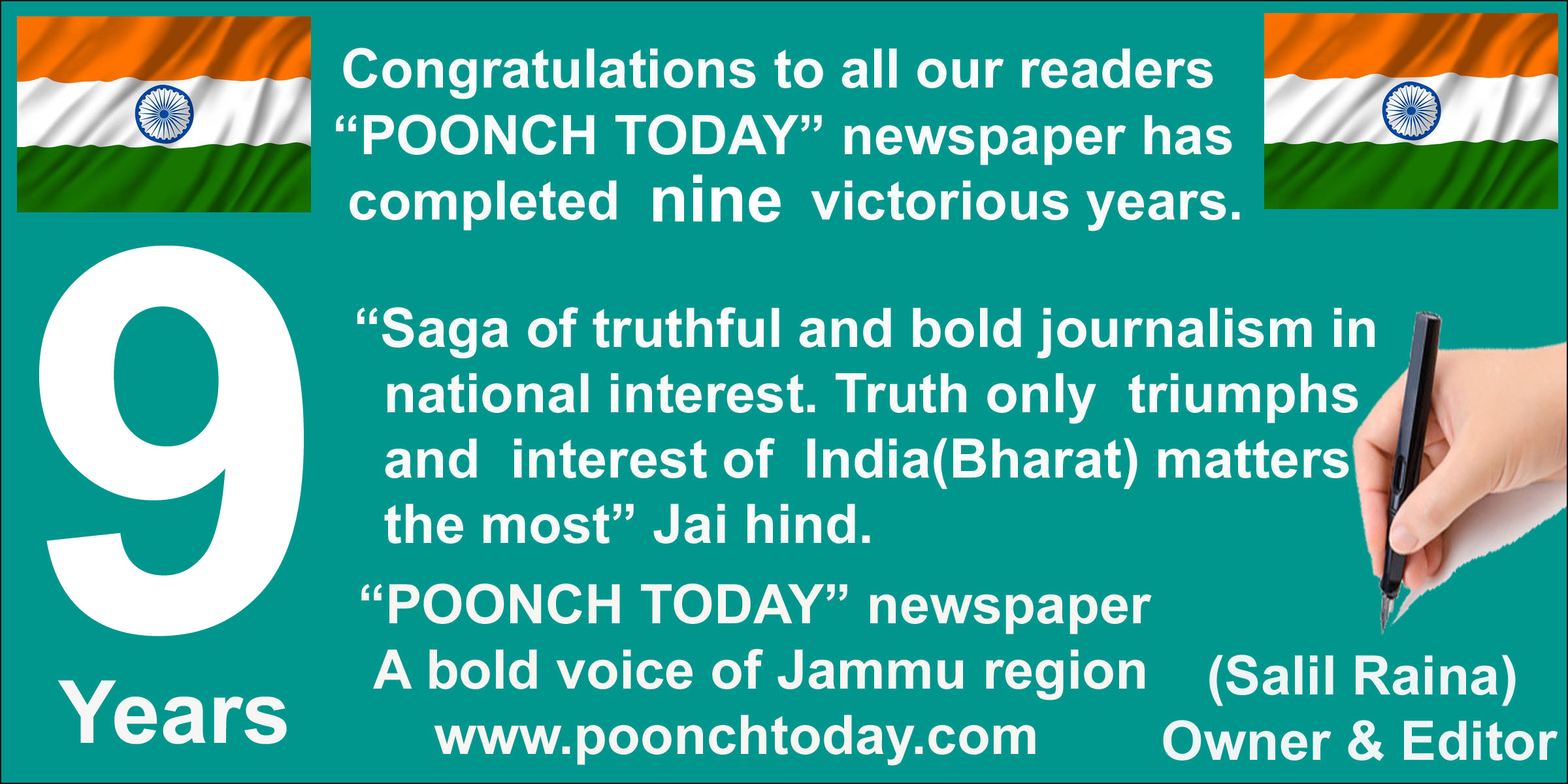 Dear readers, with the blessings of Bhagwan Shri Krishna, family and friends, Its an enormous opportunity for me to announce that yours own trusted newspaper  and a bold voice from Jammu region, namely “POONCH TODAY”, has successfully completed nine victorious years of daring journalism, amid huge pressure from every corner, reason, the paper followed the path of bold and truthful journalism in national interest. 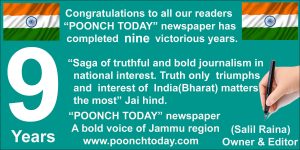 We have been following the quote of Walter Lippmann right from day one of this newspaper that, “There can be no higher law in journalism than to tell the truth and to shame the devil” and “POONCH TODAY” as we believe in calling a spade a spade. “POONCH TODAY” faced huge pressure from all corners, right from the publication of the very first issue on 1st July 2013, because the newspaper always exposed those who were involved in corruption and were standing against the public and national interest. In spite of huge pressure and threats from various quarters, the newspaper never bows down to the wrong, arrogant, powerful and tainted forces. During these nine years of journey, the paper got huge response from all the sections of the society and has become one of the most credible and bold voices in Jammu region from Poonch and Rajouri districts.  The newspaper highlighted every issue of genuine public importance, communal harmony, national interest, development and other important issues and because of its truthful and daring journalism, the newspaper has respectable readership including  more than eight lakh social media readership till now and is increasing day by day. Mostly, the newspaper exposed big scandals and wrong elements of the society and faced huge pressure from them, but in the end, it was the strong determination of this newspaper that it beat all those forces, which were standing against the truth and national interest. Dear readers, right now, we have no Reporter/Anchor/Special correspondent/Bureau chief/Stringer in any district and once we give an opportunity to  professional reporters  in near future to work with this newspaper, it will be  purely on professional and ethical lines and that will be announced properly. The journalism of “POONCH TODAY” remains so powerful that even few UT level newspapers are never afraid of copying stories published in this newspaper for their self interest which is unethical on part of such journalism platforms. Even a few self styled screech blowers belonging to such podium are seen using this newspaper’s name by getting points from investigative stories published in “POONCH TODAY” and then used to approach concerned departments in addition to threatening top officers on the name of various anti graft agencies with malafide intentions which is very unfortunate on their part. Such unethical practices which are going on frequently at different places need to be tackled strongly by intelligence and security agencies. “POONCH TODAY” remained on the forefront of professional, investigative and bold journalism in national interest and now with nine years of strong experience, our determination will remain the same in future also, come what may.   It is pertinent to mention here that huge efforts were made from various quarters to curb the bold and truthful voice of this newspaper, but every time, it was “POONCH TODAY” that emerged victorious and those, who tried to curb the truth, had to taste the dust. We don’t have any personal rivalry against anybody as we respect all. We don’t need any awards. We are not here to please anybody. We don’t want to be in the so-called “Good Books” of Civil, Police officers, leaders and political parties. Only publishing truth in national interest is supreme for “POONCH TODAY” and there will be no compromise with that at any cost. With strong strength of mind in future also, “POONCH TODAY” shall try its best to maintain the tempo of bold and truthful journalism in future also.  This newspaper’s fight against injustice, corruption and wrong elements of the social order will continue to remain the same. It doesn’t matter who stands against us as we believe that “Truth only triumphs” and the interest of India(Bharat) matters the most.

In the end, “POONCH TODAY” is thankful to all its readers for their strong faith and support to our courageous and truthful journalism. Nation first.  JAI HIND.