JAMMU: Union Home Minister Amit Shah, during his visit to Jammu, has directed all the security agencies to wipe out terrorism from the Jammu region in addition to taking strong action against the anti-national ecosystem and its OGWs. After reaching Jammu, Shah was scheduled to arrive at the Dhangri area of Rajouri to meet the affected families of the terrorist attack, but due to bad weather, he was not allowed to depart from Jammu and later chaired a high level security meet. 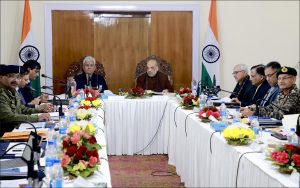 The union home minister, however, talked to affected families on the phone and assured them of the full support of the government. During the security review meeting in the presence of LG Manoj Sinha, Amit Shah was seen completely focused on his mission to wipe out militancy from J&K, especially from the Jammu region. After a threadbare discussion, he gave on spot directions related to security issues to all the agencies and directed them to cast a 360-degree net for an all-out war against militancy, especially in the Jammu region. It is pertinent to mention here that during the last two years, the Jammu region witnessed some terrorist related incidents in Jammu, Udhampur, Rajouri, and Poonch districts. However, the latest Dhangri terrorist incident in Rajouri district has forced the government to take strong action against the emerging signs of militancy in the border region of Rajouri-Poonch. It is important to note that militancy existed in Poonch and Rajouri districts years ago, but with the active participation of police, army, and other paramilitary forces, as well as the help of the people, militancy was completely eradicated from this border belt. However, in the recent past, some attempts were made by Pakistan to revive terrorism in the region, but the government appears to be in no mood to allow a revival of militancy in the Jammu region, particularly in the Rajouri-Poonch belt. The Home Minister also said that the security grid of Jammu will be strengthened on all fronts in a phased manner. The government has also handed over the case of the Dhangri attack to the NIA, and Jammu police will cooperate with the NIA in bringing the real culprits to justice. Furthermore, the NIA and the J&K police have been directed to investigate all cases that have occurred in the region over the last year and a half. In  yet another strong signal, Amit Shah directed security and intelligence agencies to flush out the anti national ecosystem and its OGWs wherever  they are working in any way.  This gesture by Shah indicated that in the coming days, an all out war against militancy, its ecosystem, and other aspects will be carried out. It is important to mention here that security agencies have a full record of all those people with questionable credentials against the nation in the Rajouri-Poonch belt, who, in the past, wasted no opportunity in disturbing peace, and the same set of people, who were not taken to task previously due to the  compulsion of political governments, may play foul again in the Rajouri-Poonch belt on some national interest issues. For reasons best known to the top brass of the police, the majority of them were not treated harshly for their questionable acts by the J&K police over the years, and the same mistake, if repeated, will prove fatal from a security standpoint, believe some senior people in the region. While talking to the media, Shah did not discuss important points of the meeting, but his strong gesture was a clear indication that security forces and intelligence agencies got a green signal from the union home ministry for an all out war against terrorism, in the Jammu region, especially in the Rajouri-Poonch belt. Meanwhile, on the targeted killings of minorities, Shah said, “CRPF, J&K police, Army, and all security agencies have been instructed to ensure that incidents like this do not get repeated. We have done a complete review with all the stakeholders to ensure peace and harmony in Jammu and Kashmir”. After the visit of Union Home Minister Amit Shah, security and intelligence agencies reportedly activated their networks robustly and are in alert mode. Previously, security and intelligence agencies performed admirably after the repeal of temporary articles 370 and 35-A, preventing forces hostile to peace from disrupting J&K again. However, with the emergence of signs of militancy in the Jammu region through incidents in Udhampur, Jammu, Poonch and Rajouri districts, the union home minister is very strict, and strong directions have been given to all security and intelligence agencies for providing a befitting response. It is likely that those, who were involved in militancy related incidents, its support structure, its OGWs, and other anti national activities, including terror funding, in the region will be brought to justice sooner rather than later.