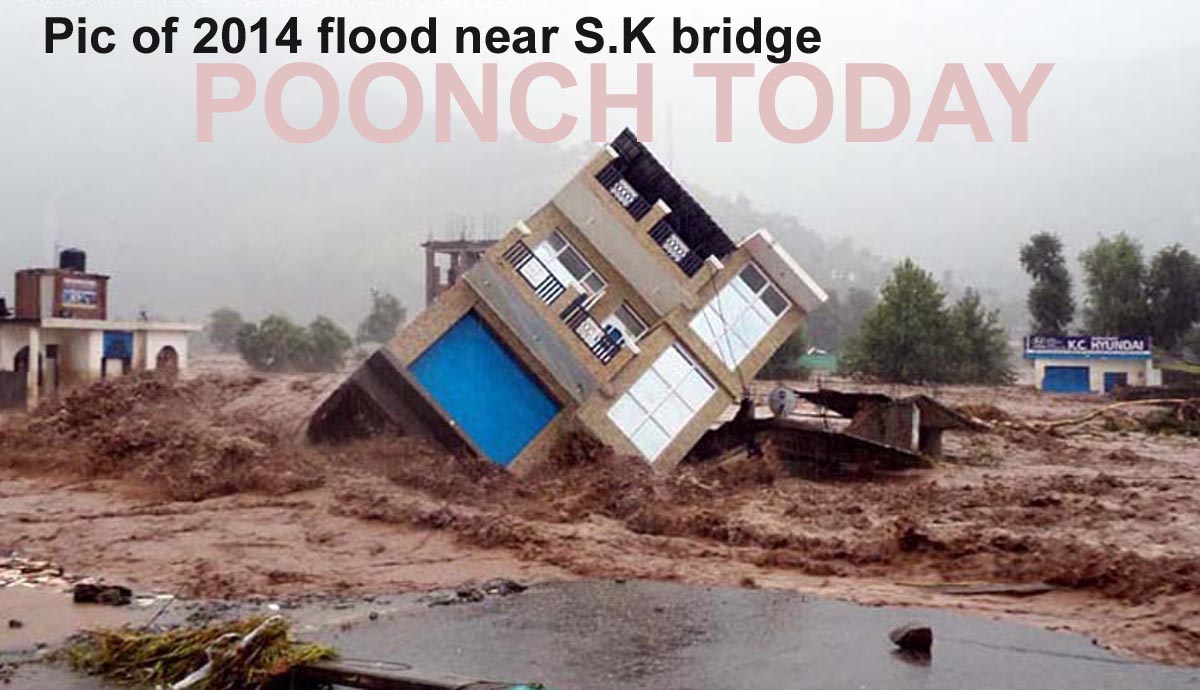 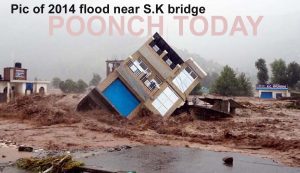 Within 23 days of publishing the story, Poonch witnessed a trailer of the flood near river bed area and after one year, Poonch, finally witnessed Uttrakhand type disaster in September 2014, in which many people, including people from other parts of J&K state, lost their lives and property worth several crores washed way in different areas. The warning call given by “POONCH TODAY” in its August 2013 edition, taken lightly by Poonch administration and  what happened in September 2014 is well known to all.  After that, district administration declared the area as “No construction zone” and ban all type  of construction/repair/restoration work in washed away area on both banks of river Suran as well as ban on sale/purchase of land/plots along the banks of river Suran including washed away/ remaining area and has order demolition of any/all structures (houses/shops/commercial establishment/ religious structures) constructed in front of culverts under approach road leading to Sher-e-Kashmir Bridge. Administration admitted that in September 2014 flood,  there was unprecedented loss of life and property, both public and private and also admitted that during the recent past unregulated/illegal houses, commercial and religious buildings have come up in the river basin Suran and during the floods these structures could not withstand the onslaught of high water current and caused obstruction in the free flow of flood waters. This resulted in massive loss of life and property and a large number of families have been rendered shelter less” But throwing that important order of administration into wind,  large number of illegal constructions started from Dungas side to Betar side via S.K bridge side and still going on with the reported involvement of few tainted officials of administration, who are not taking action, due to their reported hand in glove relations with those who are involved in such acts. Even culverts constructed for smooth passage of river water have been encroached. Huge debate is going on in Poonch city over the criminal silence of district administration on illegal constructions in “No construction zone”. The questioned silence of administration has invited huge criticism of public and people are openly saying that “Does Poonch administration want another “Uttrakhand type disaster”? On one hand, administration declared the area as “No construction zone”, but on the other hand, few departments, which includes PWD, PDD and PHE spent huge funds on installation of lights and water connections, besides making and blacktopping of roads in the said area. The criminal silence, maintained by administration, on illegal constructions, is forcing the people who are living in river bed area towards a disaster, said a senior citizen. Prominent citizens, pleading anonymity, have appealed the UTs administration to intervene and order an inquiry into the whole matter and bring to book, those government officials who played foul over the issue, deliberately with a sole agenda of hitting the financial gains, through illegal means. Another citizen, said. “Human lives are more important and it’s the primary duty of administration to discourage such illegal practice near river side from Surankote river to Betar river.” By not taking action, administration is forcing the people towards another similar disaster, which is so unfortunate. It clearly shows that capital influence is forcing the administration to maintain a silence, alleged locals. Locals have demanded immediate attention of LG G.C Murmu  and also alleged that corruption culture in Poonch administration has reached to an alarming level and due to which, law of the land exists no where. They also alleged that due to hand in glove relation of few officers of administration, open illegal constructions are going on in “No construction zone”  and if not removed, Poonch is heading for an another “Uttrakhand type disaster” and large number of human lives are at huge risk.