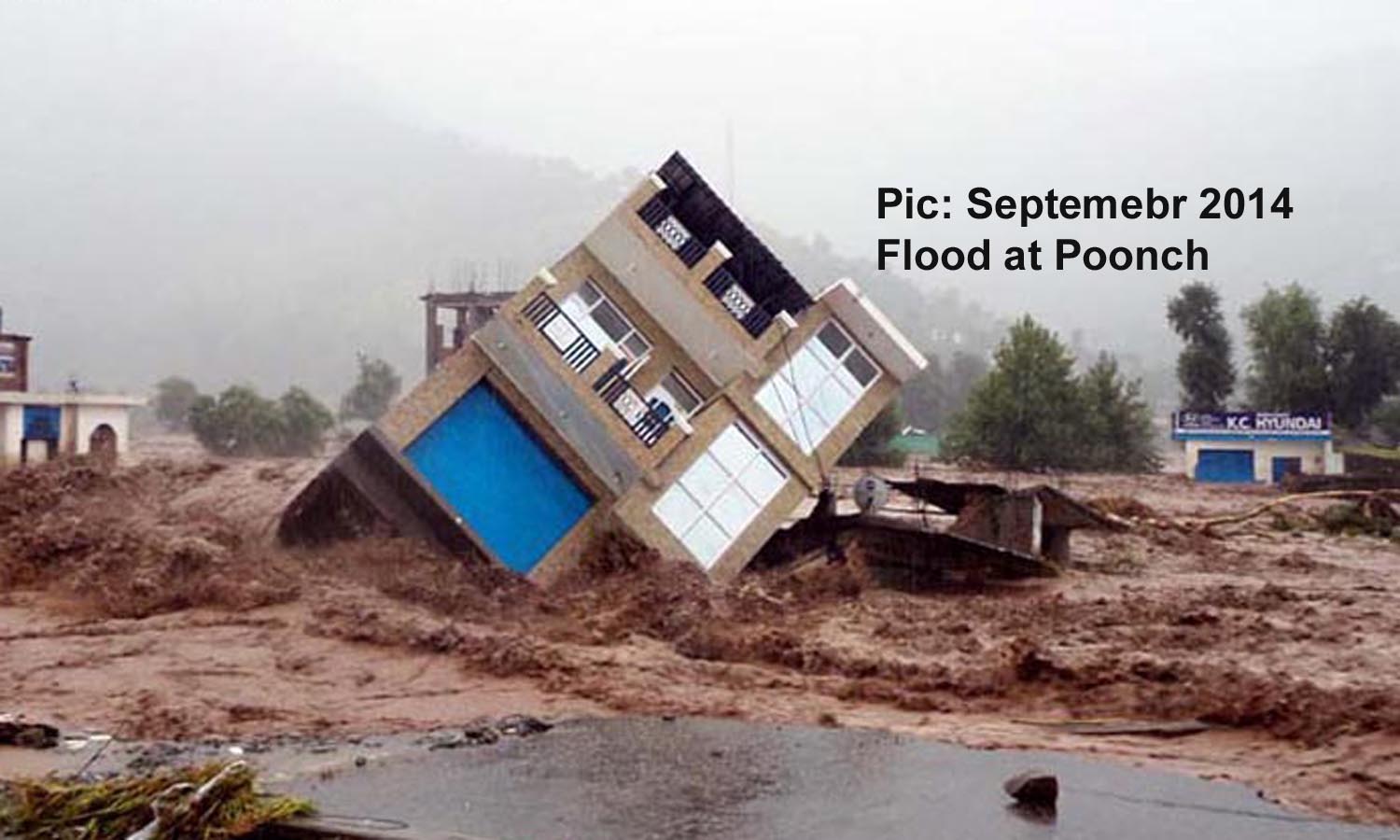 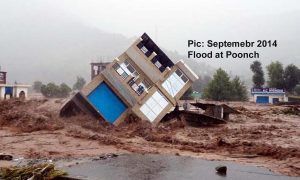 It is pertinent to mention here that “POONCH TODAY” in its edition 01, August 2013, with a farsighted vision, published a story with the title, “POONCH: Another Uttrakhand in making: Reason unabated illegal constructions in river bed area pose threat to people; administration in slumber”. After twenty six days of publishing of the story, Poonch witnessed a trailer of the flood and after one year, i.e in September 2014, Poonch witnessed “Uttrakhand” type disaster.  After that horrible flood, district administration Poonch vide its no DMP/J/3247-57 dated 31-12-2014 immediately swung into action and declared the flood zone area as “No construction zone” and banned all types of constructions and repairs in the said area. But, over the years, large numbers of illegal constructions have taken place in the same red zone area by converting cultivated land into commercial land illegally. Even PWD, PDD and few other departments spent huge funds in crores in the said area, thereby throwing government money into red zone. Earlier, administration also constructed big and small culverts for the safe passage of water near S.K bridge road, but those culverts have been encroached again as large number of illegal constructions have taken place in front of big culverts. Despite repeatedly brining into the notice of administration, no action has been taken yet against illegal constructions by administration and it shows that a high level mafia is operating within and outside the administration. In a biggest disclosure, the documents of which are exclusively available with “POONCH TODAY” shows that how district administration Poonch, with reportedly aim of legalising all illegal constructions in Flood zone, has planned for the construction of new bus stand at a cost of Rs 338.61 lacs in the same “Flood Zone” and the paper work to implement that plan is in progress including transferring of land to Municipality, thereby completely backstabbing the sentiments of entire Poonch city, just to safeguard the interest of few people and letter no DDCP/NewBusStand/2018-19/5617 dated 12-12-2018, written by Deputy Commissioner Poonch to Financial Commissioner, Housing and Urban Dev. Department shows these wrong intention of administration. Plan of shopping complex on the proposed new bus stand is also there at a cost of Rs 397 lacs and this plan lies with the department of Urban Local Bodies.  It’s a crystal clear fact that due to illegal constructions in “Flood zone”, Poonch city is under the direct threat of flood and if flood strikes again, then water will get accumulated in “Flood zone” area, where huge constructions have taken place, and it will prove a direct threat to Poonch city. Documents, which are exclusively available with “POONCH TODAY”, through  sources in the higher offices of Urban Local bodies, Jammu,  shows that district administration seems to be legalising illegal  constructions by other means of constructing new bus stand and a shopping complex in “Flood zone. Shocking factor is that PWD, Irrigation and PDD departments spent crores of rupees in the flood zone in an attempt to legalise the whole area indirectly for which a high level inquiry is needed. In this case, no FIR has been lodged by PWD, Irrigation and Revenue department against those who captured sideways of government road, culverts, water bodies and Irrigation canal. Even Revenue department remained hand in glove because a large chunk of agriculture land was converted into  commercial land, that too in flood zone, thereby barefaced violation of govt order no LB-6/C of 1958 dated 05-06-1958 and govt order no S-432 of 1966 dated 03-06-1966 took place as agriculture land cannot be used for any activity other than cultivation.  In spite of fully knowing all these rules, how district administration even thought of construction of bus stand and shopping complex in the same agriculture land that too in flood zone and it shows that something is fishy behind the curtains for which a detailed ACB/CBI enquiry is needed. On one hand, J&K UT administration has started many drives in various districts of UT against illegal structures in river bed areas, but it seems that law of the land has no takers in Poonch and this all happened with the alleged conveyance of few officials of district administration Poonch. Saving precious human lives are more important and not these illegal structures in flood zone, says a prominent citizen while talking to “POONCH TODAY”. Reportedly, huge crooked activities taken place behind the scenes to legalised the illegal structures in “Flood zone”.  Even BDO Poonch was pressurised to issue NOC in favour of people who raised structures in flood zone. How district administration befooled the entire population of Poonch was evident from the fact, that few days back, when “POONCH TODAY” published the story that administration wants to shift bus stand to S.K bridge side in “Flood Zone” and acting on that story, many leaders and business community people organised a meeting and met Deputy Commissioner Poonch in which DC assured verbally, not in written, that bus stand will not be shifted.   But, on paper, something else was going on and if this plan is implemented on the ground successfully, then it would be the biggest fraud of the decade in Poonch administration, in addition of many scams which are still existing in other departments like PWD, RDD, PDD, as the double standard of district administration has come under question.   It is pertinent to mention here that district administration declared the “Flood Zone” area as “No construction zone” vide its two orders. First order was issued on 31-12-2014 vide no DMP/J/3247-57 and second order was passed on 27-10-2018 vide no DMP/J/2037-40. After the first order of 31-12 2014, Assistant Commissioner Revenue Poonch vide no DCP/ARA/294-305 dated 19-03-2015 declared 92 Khasras numbers  in village Kanuyian having  total  area of 1,222 Kanals and 09 Marlas, under 133 of land Revenue Act 1971  and ban on all types of constructions in the said Khasra nos. In Shehr-Khas also, 192 numbers of Khasra numbers were identified having a total area of 2673 Kanal and 3 marlas and similarly, banned all types of constructions in mentioned Khasra numbers.(To be continued…………)