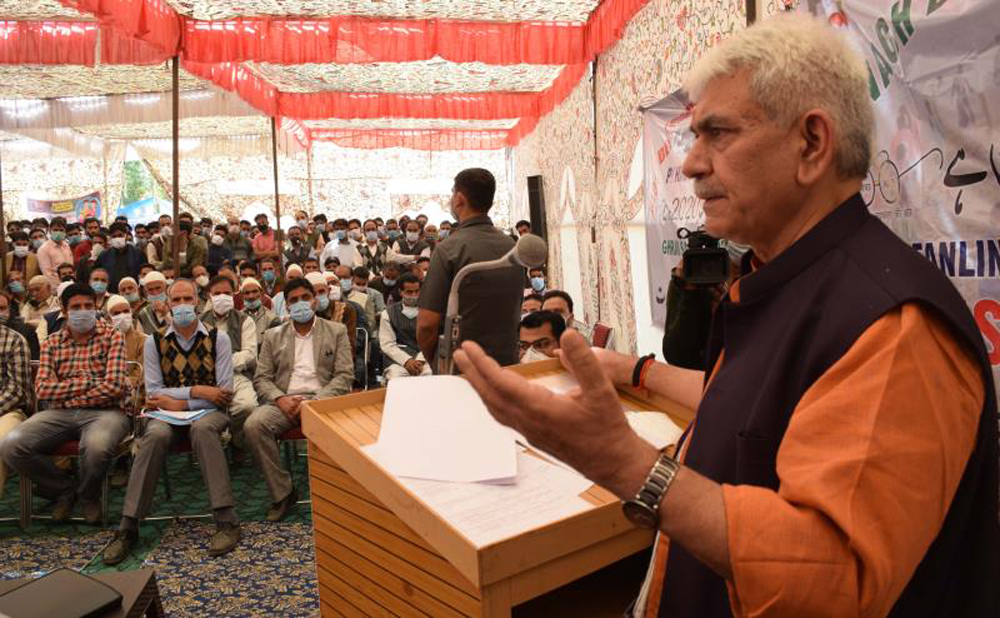 SRINAGAR: ‘The occasion of 151st Birth Anniversary of Mahatma Gandhi, also celebrated as the International Day of Non-Violence is an opportunity for the people of India to reflect upon his commitment to the principle of non-violence and I urge the misguided youth to shun violence and return to the mainstream. 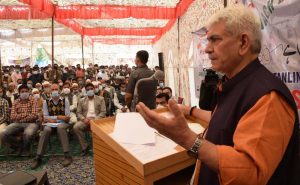 The government is ready to help all with Jobs and Entrepreneurial opportunities’ remarked the Lieutenant Governor, Manoj Sinha while launching the J&K Government’s ambitious- Back to Village-3 programme from Shirmal, Shopian. The Lt Governor, Manoj Sinha added that the people of J&K, especially the Youth wants to tread the path of progress & development and the government is committed to making J&K a role model of development and prosperity. ‘We will empower youth and strengthen PRI’s’, Lt Governor maintained. On the occasion, the Lt Governor inaugurated Youth Recreation Centre and Gujjar & Bakerwal Hostel Library at Shirmal. He also laid the foundation stone of 100 bedded Girls’ Hostel costing Rs 306.34 lakhs and handed-over various certificates and sanction letters to beneficiaries under different departmental schemes. He met various public delegations and sought their feedback and views on B2V3 and aspirations of people from different local public representatives. Sports kits to young sports persons and other assistance to facilitate sports activities, besides 03 hearing machines and one wheel-chair were distributed among the beneficiaries. He also distributed 81 Baby Kits among 81 beneficiaries of 27 Panchayat Halqas and 57 School Bags were distributed among 57 School Dropout girls of 27 Panchayat Halqas, who have been motivated to resume their studies.
While addressing the gathering, the Lieutenant Governor remembered the bond that Mahatma Gandhi shared with villages and said that Back to Village 3 is a tribute to his bond and aspirations with respect to villages. Village development will add to the nation’s development, he said.

The Lt Governor termed villages as the lifeline of India and stressed on the need for their development. ‘Just as striking two rocks produces fire and helps produce light, similarly people’s participation shall help bring about drastic changes in our villages’, said the Lt Governor.
Speaking on Back to Village-3, which starts from today, the Lt Governor called it a bridge between the public and the administration. Sharing his dream of making villages equally developed as the cities, he said that the government is persistently delivering services and helping them join the mainstream. ‘Efforts are being made to make villages Atmanirbhar’, he added.
Reiterating the government’s commitment for overall development of villages, the Lt Governor said that nobody would need to leave one’s village to seek education or livelihood in the near future. He said that the action-based execution of administrative changes being brought in Jammu & Kashmir would not only pave way for unprecedented development in J&K but also show a new path of development to the entire nation.
Speaking on earlier phases of the Back to Village programme, the Lt Governor said that their implementation and results have been reviewed and appropriate changes have been incorporated in B2V3 for better ground results. He said that every panchayat of the UT has taken up a couple of works projected during B2V1 and B2V2.
On ‘Apple Town’ Shopian, the Lt Governor said that officials have been directed to focus on the local apple production and processing with special attention on building storage capacity and other allied activities.
“I have been personally witnessing equitable change at village as well as sub-division level during my last 12 districts tours, and have conducted review meetings to gear up slow paced incomplete works. After inspecting ground implementation of governmental initiatives, directions have been passed with respect to all essential services like power, cooking gas and ration etc. Raj Bhavan helicopter has also been delegated for emergency cases, if needed. People’s cooperation is vital for development, peace and prosperity in the region’, the Lt Governor maintained. The Lt Governor also called upon the youth to take advantage of a new wave of educational and business reforms being incorporated by the J&K administration. He informed that two candidates from every panchayat are to be identified and assisted by the Special Desk of Jammu & Kashmir Bank. With sufficient handholding, 8500 of such youth would be turned into entrepreneurs. Similarly, sports kits are also being provided to every panchayat under B2V3, informed the Lt Governor.
A robust Industrial policy is in offing, which will be among one of the best in the country and will prove to be a new model of development, besides providing immense opportunity to youth with special focus on girl empowerment, the Lt Governor continued. He also urged to maintain highest sanitation standards and to install at least two dustbins in every Panchayat for solid and liquid waste management. Counting achievements under the ongoing activities, the Lt Governor highlighted that during the past two Block Diwas, impressive results have been achieved. Around one lakh students have been provided scholarships, more than 25,000 beneficiaries have been provided pensions under Integrated Social Security Scheme, more than 17,000 Kisan Credit Cards delivered, around 4600 beneficiaries, which include widows, senior citizens and specially-abled persons, added under National Social Assistance Scheme and 14,000 works started under 14th FC and MNREGA. In these two days, more than 1.5 lakh people participated, 1.43 lakh provided various certificates, revenue papers issued to more than 15 thousand, around 22,000 Ration Cards seeded with Aadhar, more than 8,000 families provided benefits of Ayushman Bharat and around 4,000 Universal Health Cards were issued. During Awami Muhim, 11,000 grievances, out of 24,000 received, were resolved on spot. Similar results would be achieved in the future due to the government’s doorstep delivery of governance. There is no dearth of funds as Rs 2.5 crore has already been issued to districts in addition to Rs 10 lakh per panchayat. Total 54 schemes of the government are giving direction to progress, and prosperity of J&K. Special focus is being laid on 100% saturation of all social security and beneficiary oriented schemes. The UT Government will not just make announcements, but would genuinely and rationally try to address the problems being faced by the people. In a major step towards the overall welfare of residents of J&K and facilitating affordable healthcare facilities, the UT Government has recently announced the Jammu and Kashmir Health Scheme in order to provide universal health Insurance coverage to all the residents of the Union Territory. In the coming days, said the Lt Governor, attention is to be given to Animal Husbandry and Sheep Husbandry which shall help generate around 50 thousand self-employments. Other areas of focus shall be Dairy, Poultry, Fisheries, Agriculture and allied sectors, he said.

Efforts are on to introduce micro-irrigation in J&K. Economic clusters are going to be made to promote village industries. Similarly, local Self-Help Groups, playgrounds and redundant government buildings are also going to be put to use. It shall be my endeavour to rejuvenate the lagging sectors and underdeveloped sections of the society. ‘On my list, completion of languishing projects, road connectivity, delivery of basic amenities is at the top priority. On spot delivery is starting to become a new normal in the UT’, said the Lt Governor. He asked the Panchayat people to own B2V programme and appeal to the people to come forward and participate in large numbers to make B2V3 a grand success.
The Lt Governor asked all stakeholders and the public to observe social distancing and other preventive measures against COVID-19 while participating in the Back to Village 3. He sought their cooperation in bringing education, health and livelihood opportunities to earlier relegated sections of the society. He also called upon the public to interact and give thorough feedback to visiting officers during B2V3.
The Lt Governor assured the public that Back to Village 3 is not a one-time event, but a part of regular grievance redressal mechanism under which senior officers are to address grievances at subdivision level every Wednesday on rotational basis. He also called upon the government officials and functionaries to generate awareness about all these initiatives of the government. Small initiatives can bring immense change. We should all take a pledge to realize the dream of Mahatma Gandhi of village development. Welfare and prosperity of common mass, especially the youth is the top priority of the J&K Government, the Lt Governor maintained.
He stressed on better road connectivity of all major roads with special focus on connectivity of Regional Head Quarters to District Head Quarters. Instructions have been passed for replacing damaged Transformers within 24 hours. He announced that winter preparedness stock will be ready by October 15. Playground in every panchayat will be established to motive the youth to indulge in sports activities. Genuine demands and grievances shall be addressed on merit, he continued. For the welfare of the rural population, works are being done in Panchayats and many more would be done in the coming days that will open the window of employment opportunities and education avenues for the people. The results of the Government’s efforts to give a fillip to the socio-economic conditions of the rural J&K will soon be visible on the ground, the Lt Governor said.
Sh. Rohit Kansal, Principal Secretary, Power Development Department and Information Department; Sh. Pandurang K. Pole Divisional Commissioner Kashmir; Sh. Vijay Kumar, IG Kashmir; Sh. Choudhary Mohammad Yasin, Deputy Commissioner, Shopian and other senior officers were present on the occasion.