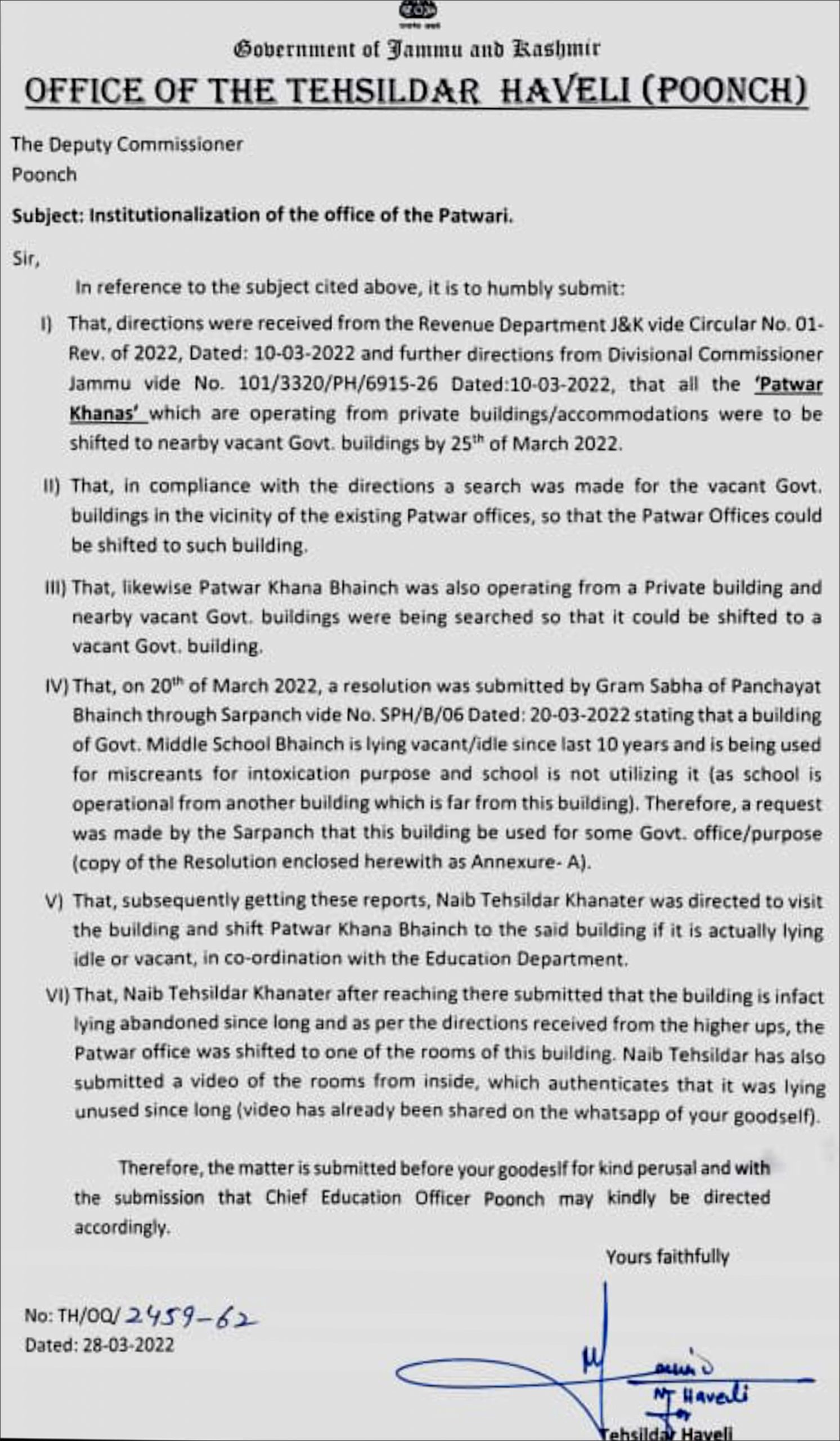 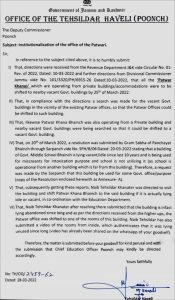 In that list comes another achievement of the revenue department and this is related to illegally and forcefully capturing a school room of Middle School Bhainch, the other day. As per the version of school authorities, Naib Tehsildar Bhainch went to M/S Bhainch and forcibly occupied a room of the said school. When the school authorities objected to the unparliamentary behaviour of the Naib Tehsildar, the latter behaved in a rude manner and tried to show his so-called “Power” to the staff of the school. Time and again, he said that he is a magistrate and he can do anything”, said officials of the school. The matter came into the notice of ZEO Kanuyian, DEPO Poonch and Chief Education Officer Poonch. DEPO Poonch Narinder Mohan Suri in his statement to the media said that he came to school on the basis of a complaint against Naib Tehsildar by school authorities. He said that during COVID crisis, school authorities were following COVID protocol and this was the reason that school, which is divided into two parts, was not being used for education purposes. He said the school has  162 students and five rooms and the staff was asking for more sections for ensuring smooth education to all students. DEPO also said that the Naib Tehsildar forcibly occupied the room and the matter has been brought into the notice of Deputy Commissioner Poonch. He also said that Naib Tehsildar misbehaved with a lady ZEO Kanuyian which was very unfortunate. Meanwhile, Tehsildar Haveli’s  letter has exposed the ill intention of the revenue department and it shows that all the officials of revenue department are hand in glove. A top ranked officer of administration also visited the school and verbally directed the school authorities to allow the office of Naib Tehsildar to operate until other arrangements are made. Tehsildar Poonch, vide his no TH/OQ/2459-62 dated 28-03-2022, addressed to Deputy Commissioner, in point no IV said that a resolution was submitted by Gram Sabha in which the Sarpanch said that the school building was lying idle for 10 years and should be used by revenue department, which was denied by DEPO when he said that the school was closed for nearly two years only due to COVID. Moreover, in point no V, Tehsildar also said that the exercise was conducted in coordination with the Education department which is a total fraud on part of Tehsildar who was valued by all unfortunately, not going by his real intentions as explained by the letter. Even in point no VI, Tehsildar presented facts based on imagination and not real facts. The contents of the entire letter shows that the revenue department officials were having ill intention of grabbing the school room because in majority of land related frauds, Tehsildar  never acted, but what was the actual reason that allowed the Tehsildar to immediately swing into action on the resolution of a Sarpanch. This clearly shows that everything was pre planned. Has Deputy Commissioner Poonch given unlimited powers to the revenue officials to misbehave with senior officials of other departments?   It is a fact that the Revenue department Poonch has become a department of land grabbers. On one hand, department officials failed to retrieve government lands and taking action against illegal encroachments at multiple places under a planned agenda of wrong forces which are operating in a silent way behind the curtains, but on the other hand, revenue officials are occupying school rooms forcibly and illegally. The silence of administration raises a question mark on the system of governance and if the government fails to take the said room back, then it will lead to a conclusion that revenue department officers believe in “Official Gundagardi” and not in giving justice to the people as per the merit of the case. A high level inquiry is needed from the government into the matter as students should not suffer at the cost of arrogance of revenue officials, feel locals.

Question mark on the intelligence grid of Rajouri police over repeated attempts of blasts in the district
Chief Engineer PWD Jammu has legalized all illegal activities with his unfortunate approach; 25% to 30% commission in divisions a routine affair