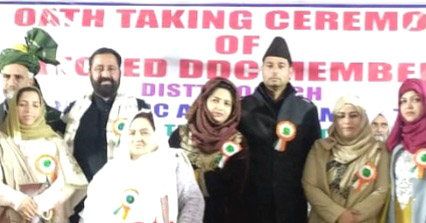 POONCH: DDC elections, which were completed few days back, held first time in seventy years and with the successful holding of elections, government has succeeded to establish three tiers of Panchaytai Raj system at grass root level. 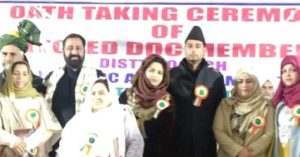 Today, during the oath taking ceremony of DDC members in the premises of govt degree college, Poonch, which was held peacefully in presence of prominent dignities, administration failed to play “National Anthem” on this historic day. It is pertinent to mention here that UT and Union governments have successfully conducted elections to all the three tiers of democracy and this happened for the first time after independence and to add dignity to oath taking ceremony, it was the moral and ethical responsibility of administration to play “National Anthem” as all the members took oath under the Indian constitution. It’ a sheer failure on part of Rural Development Department which organized oath taking ceremony of DDC members. Even , none of the DDC members raised the issue of playing of “National Anthem” to mark this historic occasion of establishment of three tiers of democracy at grass root level. An officer of administration, when contacted on the issue of not playing of “National Anthem”, pleading anonymity,  he said, “ I cannot say anything”. The other day, DDC Doda Dr Sagar D Doifode also directed officers of Doda administration to start “Oath Taking” ceremony of DDC members by playing national anthem, but the same was not happened in Poonch. As per various orders relating to the “National Anthems” of India, it can be played on the unfurling of the National Flag, on cultural occasions or ceremonial functions other than parades. (This could be arranged by having a choir or adequate size, suitably stationed, which would be trained to coordinate its singing with the band etc. There should be an adequate public audition system so that the gathering in various enclosures can sing in unison with the choir), but the question is why Poonch administration failed to include “National Anthem” as a part of oath taking ceremony as it’s a big question mark on Rural Development Department. .