PWD Division Poonch and blacktopping scams are made for each other; Top officers as usual unmoved

POONCH: Poor quality blacktopping works of PWD Division Poonch has remained a regular exercise, but those contractors having blacktopping plants used to have a target to hit maximum money by any means, even by compromising quality of blacktopping of many roads. 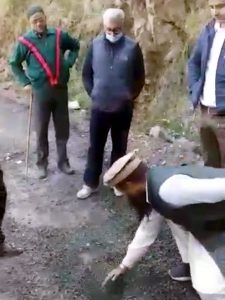 Few days back, a video went viral on social media in which people were seen targeting PWD officials verbally by alleging that PWD was involved in poor quality blacktopping of roads. As per the version of locals, JE gave them cold shoulder by saying that, “Kaam aise hi hoga, aap chahe jo marzi kar lo”. Insiders in the PWD department told “POONCH TODAY” that few firms which used to provide blacktopping material for roads have a secret understanding with top PWD officers and they used to get maximum contracts of blacktopping of roads. On one hand, top officers used to earn handsome commission from those firms and on the other hand, the said firms used to indulge in poor quality blacktopping of roads, thereby openly murdering the government exchequer.  There are many roads in the PWD division and various sub divisions of Poonch district where poor quality blacktopping of roads remains a most common practice. Even, there are some roads, which were blacktopped once, but repeated bills were withdrawn on the name of blacktopping from the said roads time and again with the involvement of JEs and top officers. While forming bills, JEs used to show a desired specification of blacktopping, but on ground, contactors always use much below than the desired specification target. There are few JEs who remained involved in such works by doing works registered on the names of their close blood relatives and such examples are in hundreds. Most unfortunate thing is that despite fully knowing various blunders in PWD division Poonch under different schemes, no inquiry whatsoever was initiated by the government and it clearly shows that government claims of a transparent system are hollow on the ground. Chief Engineer and SE PWD Rajouri have also become mute spectators on ongoing frauds in PWD.  For the overall development of any district, good roads play a vital role, but here in Poonch district, the main motto of PWD officials and a few Contactors is only to hit financial gains by any means, even at the cost of people’s aspiration for having good roads.

Attention please! COVID protocol is only for common man and not for civil and police officers; Officers visit to ‘Flood Zone’ to celebrate Republic day
Fearless, honest, real leader of masses and a saintly figure  Sher-E-Poonch Yashpaul Sharma’s era has ended with pride