Latest News
Mishandling of power! Pleasing top bosses by gruelling individuals without investigation has become a new mantra of the Poonch Police; DGP’s intervention  needed93 Infantry Brigade authorities fail to strengthen the spirit of the sports with unprofessional approach; One mismanaged hockey event mar successful Link up day celebrationsWith Panchayat and Local Bodies elections due next year, assembly elections in J&K are likely to be put offCredibility of the Poonch administration has reached a frightening low due to reports of intensifying dishonestyPUBLIC NOTICE “POONCH TODAY” bold journalism is totally based on an impartial and investigative nature
As usual!  Mehbooba’s affection for Pakistan was on display once more during the recently concluded T-20 world cup – Poonch Today

As usual!  Mehbooba’s affection for Pakistan was on display once more during the recently concluded T-20 world cup

POONCH: Mehbooba’s love for Pakistan is not a new thing; people have seen it a number of times. She remained Chief Minister of the erstwhile state of J&K under the Indian Constitution, but after the BJP-PDP coalition government fell, Mehbooba made many controversial statements against the Indian Union. 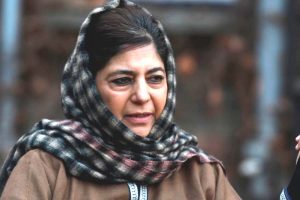 Her very unfortunate statement, “Tirange ko koi kanda nahi dega agar 370 toota,” murdered the sentiments of people throughout India. What happened afterwards is now history. Mehbooba must have had sleepless nights after Modi and Amit Shah successfully repealed the temporary articles. The whole operation was conducted successfully without an iota of violence. To counter the BJP, the GUPKAR alliance was also formed, but that also seems to have collapsed now. Desperately looking for power by pleasing the people of Kashmir Valley with his controversial statements, Mehbooba seems to have forgotten that the government at the centre is not a remote-controlled government, as the nation witnessed from 2004 to 2014. This is the most popular and strongest government, with the capability to take strong decisions in the national interest. Mehbboba was never seen condemning Pakistan over terrorism. She never condemned militant attacks on security forces. She never condemned targeting killings of non locals in Kashmir. She never stood against stone-pelters. She never seemed to enjoy India’s cricket victory over Pakistan, or any other Indian victory in any other game. Yes, her love for Pakistan was seen time and again. During the just-concluded T-20 world cup, when India beat Pakistan, Mehbooba and her supporters were in shock. But when Pakistan entered the finals and there were speculations that there would be an India-Pakistan clash in the finals, Mehbooba wrote on his Facebook post, “The PDP youth convention scheduled for the 13th Nov  has been postponed because of the likelihood of an India-Pakistan cricket match. I hope LG admin and police sportingly treat it as a game and not an excuse to crackdown on young boys in the valley.” She was the same Mehbooba Mufti who earlier shielded stone pelters by branding them as “Bhatke hue Naujawan.” She was never seen standing with the country during difficult situations, but she never wasted an opportunity to create a controversial issue a number of times out of nothing. Rather than standing with the government and encouraging strong action against Pakistan for sponsoring terrorism, Mehbooba was seen favouring talks only. Such a behaviour from a former chief minister shows that her love for Pakistan is greater than her love for India, and if this is true, then it is very unfortunate. On the other hand, despite getting major setbacks at the hands of the Union government for toeing the line of Pakistan, many Kashmir-based political leaders seem to have not learned any lessons and the way things are going on, who knows the  Union government may shut down their political industry for their acts against the national interest.

On accountability and performance, Poonch district administration has nothing to show; Top officers prefer arrogance over performance
Coming assembly elections likely to be dominated by the Gujjar-Pahari issue in the Poonch-Rajouri belt; Vibodh, Pardeep played a big role in ST status to Paharis