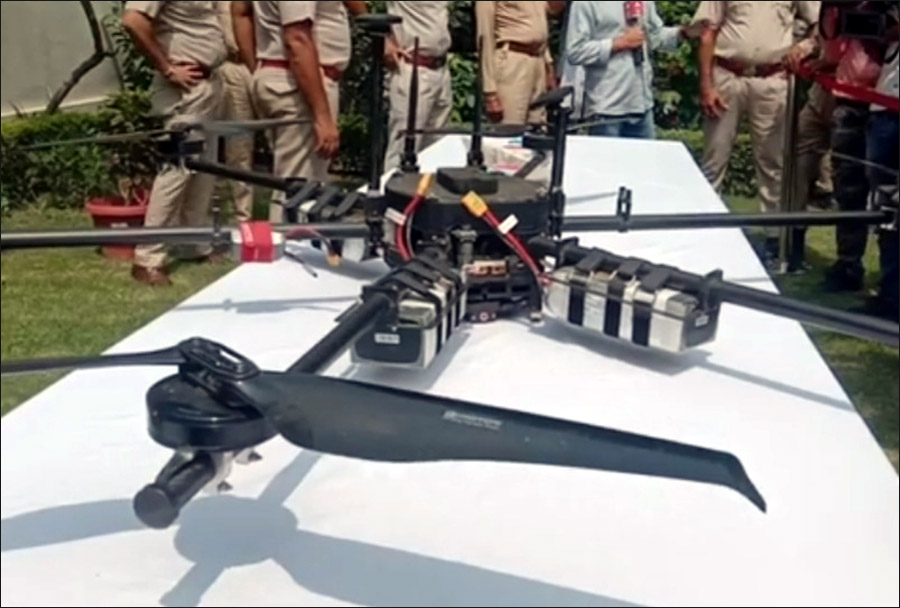 JAMMU: In a big success for Jammu police, security officials who were on high alert following start of drones intrusions near important installations of Jammu, today, averted a major tragedy by shooting down a hexa copter drone carrying 5 kg payload(IED) at Akhnoor. 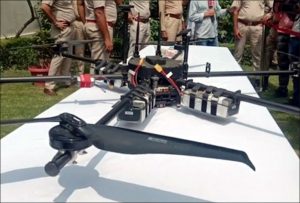 It is important to mention here that Pak elements are trying hard to carry their nefarious designs of playing foul near important security installations in and around Jammu and many unsuccessful attempts were made during the last few days. Jammu police officials are on high alert since the start of drone activities and all out planning is being made to defeat enemy’s design. With todays, success, Jammu police have averted a major tragedy. IGP Jammu, Mukesh Singh(ADGP) said that the hexa copter carrying a payload(IED) of 5 kg and the threads were same as that of ones used for payloads dropping at Air force station, few days ago. He also said that J&K police had specific input that militant outfit Jaish had a plan to drop payload in Akhnoor and nearly around 1 am, alert QRT(Quick reaction team) of police, in a major achievement shot down the drone.  Drone activities have been going on regularly in and around Jammu and it shows that Pak is desperate to transport explosive materials for creating uproar in Jammu region. Earlier, drone had dropped various AK-47 rifles in various attempts and 16 AK -47 rifles have been recovered by Jammu police. J&K police are on high alert following regular drone attempts and various ways and means are under study to counter this threat. It is pertinent to mention here that Jammu police(SOG) earlier arrested few militants from different locations and recovered huge explosive materials from them and now latest act of shot down the drone shows that country’s elite force is on all time alert to foil enemy’s design of creating fracas in Jammu region. Following drone related activities, few district administrations in J&K UT have banned using drone for private business and other related activities.  Top rank J&K police officials have been studying this drone based modus operandi of Pak and possible counter measures for such activities may likely to see the light of the day.