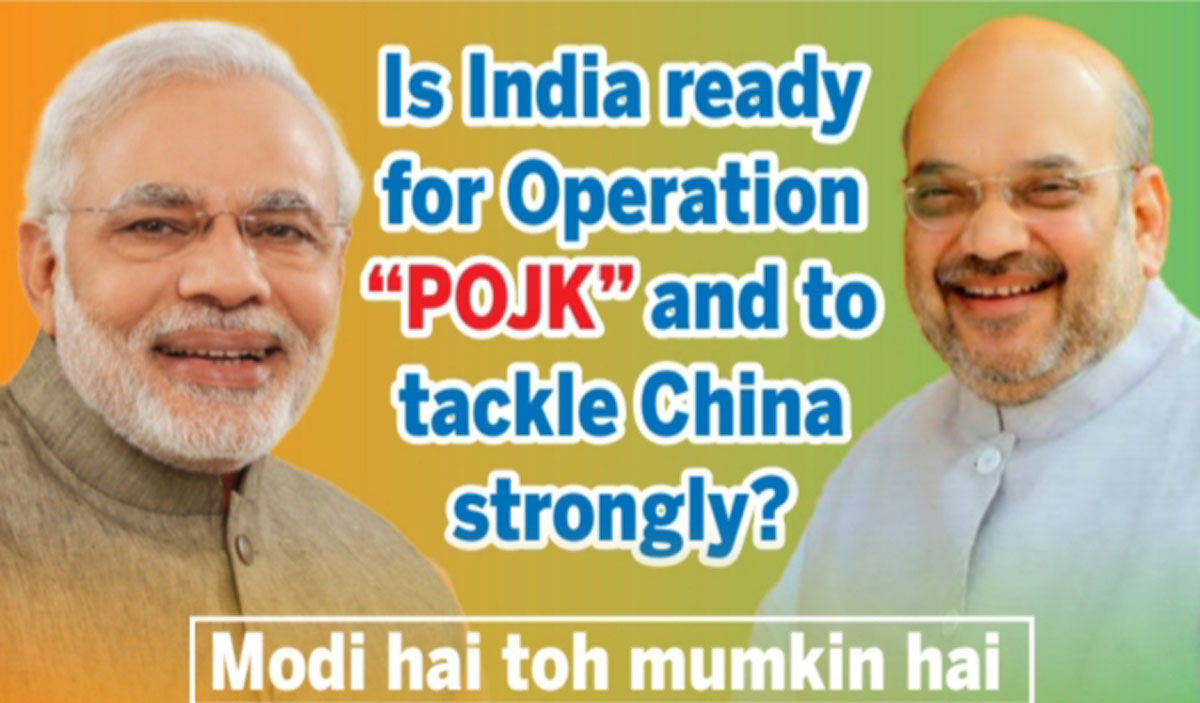 POONCH: India is facing challenges from many fronts at a time these days. On one hand, China is showing total aggressions in Ladakh region and on the other hand, continuous terrorism activities are going on from Pakistani side. 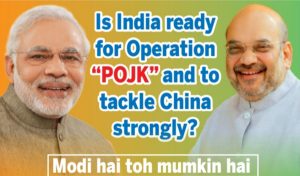 Moreover, few political parties known for sacrificing national inertest to grab chairs are doing everything to put political pressure on the government, even during ongoing Corona crisis, through their paid agents, which are present in every field, off and on and rise of anti national rhetoric and fake news propaganda is a part of this high profile conspiracy of these few political parties who ruled the country for several decades. Despite multifaceted challenges, union government being led by the  powerful duo of PM Narendra Modi and Amit Shah with the most precious advises of National Security Advisor Ajit Doval and Chief of Defense Staff General Bipin Rawat, have prepared a plan to deal with all types of crisis. The morale of Indian security forces is high, because they are having backing of a strong government which is capable to take bold decisions in national interest and taking back “POJK” is part of this plan in addition of tackling China through all strong means.  It is pertinent to mention here that after the abrogation of Art 370 and 35-A, Home Minister, Amit Shah, after successful conducting biggest political operation of last seven decades in J&K, in parliament said that government will take POJK back, because Pakistan has illegally captured all areas in POJK including Gilgit-Baltistan. The same statement was again repeated by Amit Shah during a Republic Summit during ending November 2019, where he said, “I don’t think the plan of action and its time should be discussed openly on television. At the right time, like Article 370, it should be executed.” For making this huge statement, the Home Minister got a roaring response from the crowd as he promised to deliver on POJK. He added that the government did not declare anything before conducting surgical strikes and the Balakot strikes as well. On recent developments in Pakistan, in which Supreme Court of Pakistan has accepted the plea of Imran Khan led government  to amend the Government of Gilgit Baltistan Order 2018 for conducting elections later this year in Gilgit Baltistan. The plea also requested for setting up a caretaker government till elections are held. India has already taken this development very seriously and asked the Pakistan to vacate all areas illegally occupied by Pakistan. Government of India was long ready with “POJK” mission with a perfect plan of action and only time and day has to be decided. On the other hand, China is repeating its foul play in Ladakh and India is responding tactfully, but strongly beyond expectations. Few days back, India’s aggressive stand on Ladakh issue forced the China on back foot and it’s a big diplomatically victory for India after Doklam standoff. The recent statement of US President Donald Trump against China is also good for India diplomatically.  However, in dealing with Pakistan, government reportedly has made a plan to take on POJK, both diplomatically and by other means. Through a diplomatically attack, government’s Indian Meteorological Department (IMD) has started showing weather reports of all areas in POK including Gilgit-Baltistan and Muzaffarabad region and this action has given a massive setback to Pakistan and China, because the CPEC corridor between China and Pakistan passes from Gilgit-Baltistan area. The aggression from Union government’s side has made one thing very much clear that government is keen to take POJK back, which was captured illegally by Pakistan after the partition. The government’s preparedness on this biggest mission is evident from the fact that former Army Chief and Minister of State (MOS) for Road Transport V.K Singh, the other day, said that government has a plan to recapture POJK and action on this will be taken at an appropriate time. Singh, said, “Entire Kashmir, including POJK belonged to India and that territory will come to us automatically” added “it will happen when the time comes.” Even IAF Chief also hinted that Indian Air force is ready 24×7 to conduct any operation. The other day, Dr Jitendra Singh, while talking on a national channel also hinted that POJK belongs to India and government will take it back. He also referred to parliament resolution of 22nd of February 1994 in which former PM P.V Narasimha Rao also mentioning taking POJK back.  Now a days, even some Pakistani channels were seen saying, “Modi jo kehta hai who karta hai.” One thing, which is famous for both PM Modi and Home Minister Amit Shah is that they always conduct all operations in a planned and secret way with 100% strike rate and India has seen this many times. The tough postures from both PM Modi and Amit Shah, on national interest issue, has shaken all those forces who always stood against the interest of the country and have been doing everything to destabilize this government by creating internal disturbance in the country on various issues. Highly placed sources in BJP Camp told “POONCH TODAY” that Modi’s government has made a big planning on many issues of national interest and if these reports are to be believed, then many tough laws will be introduced in national interest and strong action will be taken to tackle various menaces operating in the country including the rise of anti nationalism.   Well, these things may take time, but the top most priority of the government seems to be tackling strongly the ongoing China’s issue in Ladakh and to take back “POJK”, and planning to tackle both of them is ready, at all levels, because there were reports that Pakistan may play foul against India with the support of China, but, over and above, taking POJK back and dismantling terror infrastructure within and outside Indian boundaries seem to be the top priority of PM Modi and home minister Amit Shah.

India will win its fight against COVID-19: PM Modi
Omar Abdullah should understand that J&K is not like Northeast and other UTs; J&K is a national property